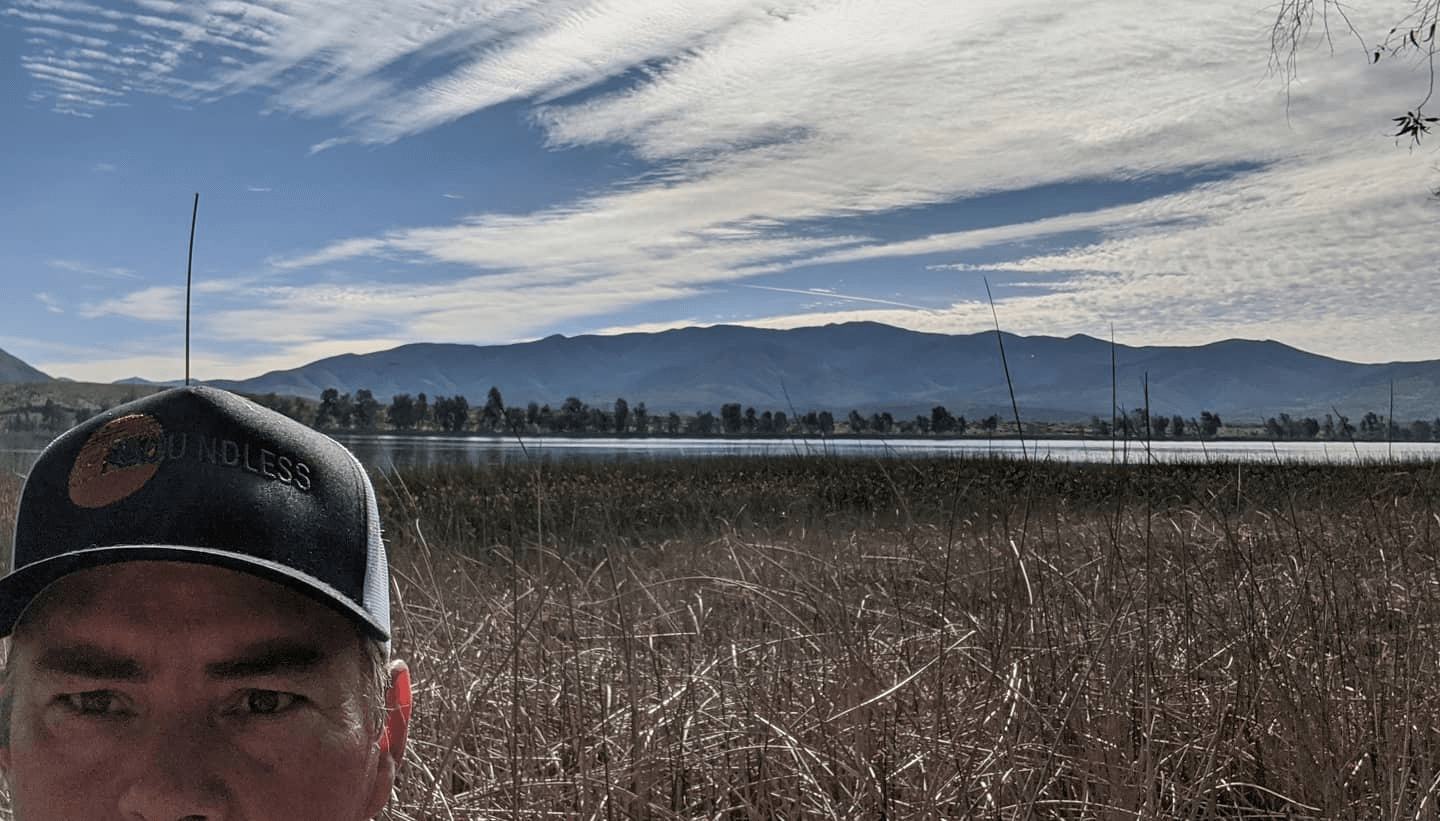 Running has always been hard for me.

All my life I have struggled with weight issues and that has affected my desire and ability to run. When I was in the Navy, up until the last three or four years of my 22-year career, I only ran when required and for the most part that was only twice a year for the semi-annual 1.5 mile “PRT” or Physical Readiness Test. I never really found the run portion of the test to be a struggle but I for sure did not look forward to it, nor did I set any records on the course! Sometime towards the end of my career I worked in close quarters with a guy that was wanting to stretch his endurance out and he influenced me to go with him. I enjoyed our runs along the streets of Coronado and we eventually set a goal to run from our command building all the way around the “island”, which would total just under ten miles according to our calculation. After weeks of training, we set out on our first “big” run! We were both pleasantly surprised when neither of us struggled to complete the loop course without stopping! At some point afterwards, we got the notion to start training for a half marathon! Looking back, I kind of laugh at the anxiety I had for a 13.1-mile run, but at the time it was a really big thing to me! We trained for a few more weeks and then decided to do the loop again but add a little to our course so we would go over ten miles. And then, a couple of days before we were supposed to run, I hurt my hip! I could barely walk! Let alone run… I was so dejected that I was going to lose all the momentum that I has built and I just kind of lost interest for quite a while! Fast forward a few years to me getting involved in triathlons after wanting to do something to bond with my oldest son, and I started to enjoy my training with him and other people in the sport. I started to get in better shape, which made all three disciplines less daunting. I also really looked forward to getting together with him or with my new “Tri friends” for our training sessions. My son eventually became enveloped with school and friends and lost interest in triathlons. My interest faded for a while also and I noticed that I started gaining a bunch of weight. Because I had experienced the “high” from racing with my son and the fun I had running with my friends, I knew what I needed to do to get back in shape. So, I signed up for another race! The race was in early May of 2012 and I enjoyed training with and around my newfound friends. I surprised myself with how well I did in the race and was on cloud 9! …And then I took my son and his friends to a paintball park for his birthday celebration a few weeks later and had a freak accident that resulted in a complete spiral fracture of my right tibia just above the ankle and a break of the right fibula just below my knee! Back to dejected! Overnight surgery to place a plate and 14 screws in my leg and the accompanying months of no weight bearing activities was exactly what a dejected person with a natural weight problem did not need! I ballooned back up and beyond what my previous max weight was. I liked to consider my comfortable weight to be 195-200 lbs. and I had peaked at 235 pounds! I was in a rut mentally and physically. My wife and I joined a national weight-loss program and went on a mission to get in shape together! Actually, my wife was doing it on her own and I saw her incredible results and decided I better get on her program quick! LOL We both lost a lot of weight and started feel much better about our health! I was MOTIVATED again and ready to try triathlons again, and NOT have to sign up in the big guy category! Truth be told, I went overboard on my training and racing. I quickly went from racing almost every local sprint distance triathlon and 5-10k event I could, to stretching my endurance out to the Olympic distance races. I eventually stretched my running out to half marathon distance and finally completed that goal that my friend and I had set years before! And then one day I signed up for an Ironman 70.3 race, which consisted of a 1.2-mile swim, 56-mile bike ride, followed by a 13.1 mile run! I trained and trained and trained some more for that race! I got to a point that I was spending more time training with friends than I was being at home with my family. Come race day I went out a surprisingly finished in the upper percentile of my age group! I was so happy with the results

that I signed up for another one! I had built a new “family” and they were all supportive of each other and that was extremely motivating to me! I wanted to be in better shape! And then the running group that I had trained with diminished and eventually disbanded! It did not take long though before I joined another group that met on Tuesday nights at my local YMCA, and they were an instant new family! After listening to some of their stories and race reports, I started to learn of a new level of crazy! Some of these people were “Ultra Marathoners”! I didn’t really have a desire to do and ultra, but I did want to know if I had what it took to complete a full 140.6, “Ironman”, distance race! I knew I could swim the required distance and complete the bike ride, but I wasn’t sure if I could then do a full marathon afterwards; or if I could even do a full marathon! So, right after finishing my second 70.3 race, or “half-Iron”, I signed up for another one AND I signed up to run a full marathon! My training plan for the triathlon started on January 1st; yeah, no partying for me the night before! About six weeks into that plan, my training plan for the marathon began. I modified both so that they complemented each other and was one training fool! Ha! Early April came and I completed the Oceanside Ironman 70.3 race (my favorite course of the three) and then it was on to focus on my running and stretching it out for the marathon. I trained alone when I had to but joined in on group runs that fit into my plan any and every chance I got! I REALLY enjoyed running with my friends! Somewhere around the middle of May, I started to get an aching pain in my lower leg. I shrugged it off and continued to train. And then some days it would be worse, and I would have to take ibuprofen before and after my runs just to make it tolerable. I was not going to back out of that marathon though! Early June came and, sore leg and all, I went out there and ran that entire 26.2 mile course and then celebrated my accomplishment with my friends and family! And THAT’S what I remember most, celebrating with my friends and family. Oh yeah, and that I didn’t want to do a full Ironman race anymore! HA HA!!! A week or so later, I decided I wanted to join my friends in their training plan for a 50k trail race to see if my leg would hold up and because I really enjoyed being out in nature and on the trails. I only lasted 1 training run and my body told me that it wasn’t in the cards right then. So, I did exactly what I shouldn’t have done and just quit all training. While I was telling myself that I was healing my leg by not running on it, I wasn’t doing anything else to stay in shape. And just like that, I ballooned in weight again! And from that point on two years ago it’s been and up and down battle for me! I’ll get back into some sort of running regiment and start to build my endurance and then get some sort of injury that keeps me from running. I burned myself out with the triathlons, but I can’t imagine I will ever get burned out on the feeling I get ,and the fun I have, when I’m out on the trails with my “dirt” friends! There’s just so much more to see and appreciate when I’m on trails than there is or ever was when I was running and training on the roads. One true thing came out of all the training and racing; I never really enjoyed doing any of it by myself.

Running has always been hard for me but running with the friends I have met in the trial running family and the triathlon family makes me want to always try to break those mental and physical boundaries! Like Kenneth always says, you have to “Love it! Hate it! And Embrace it”!!! 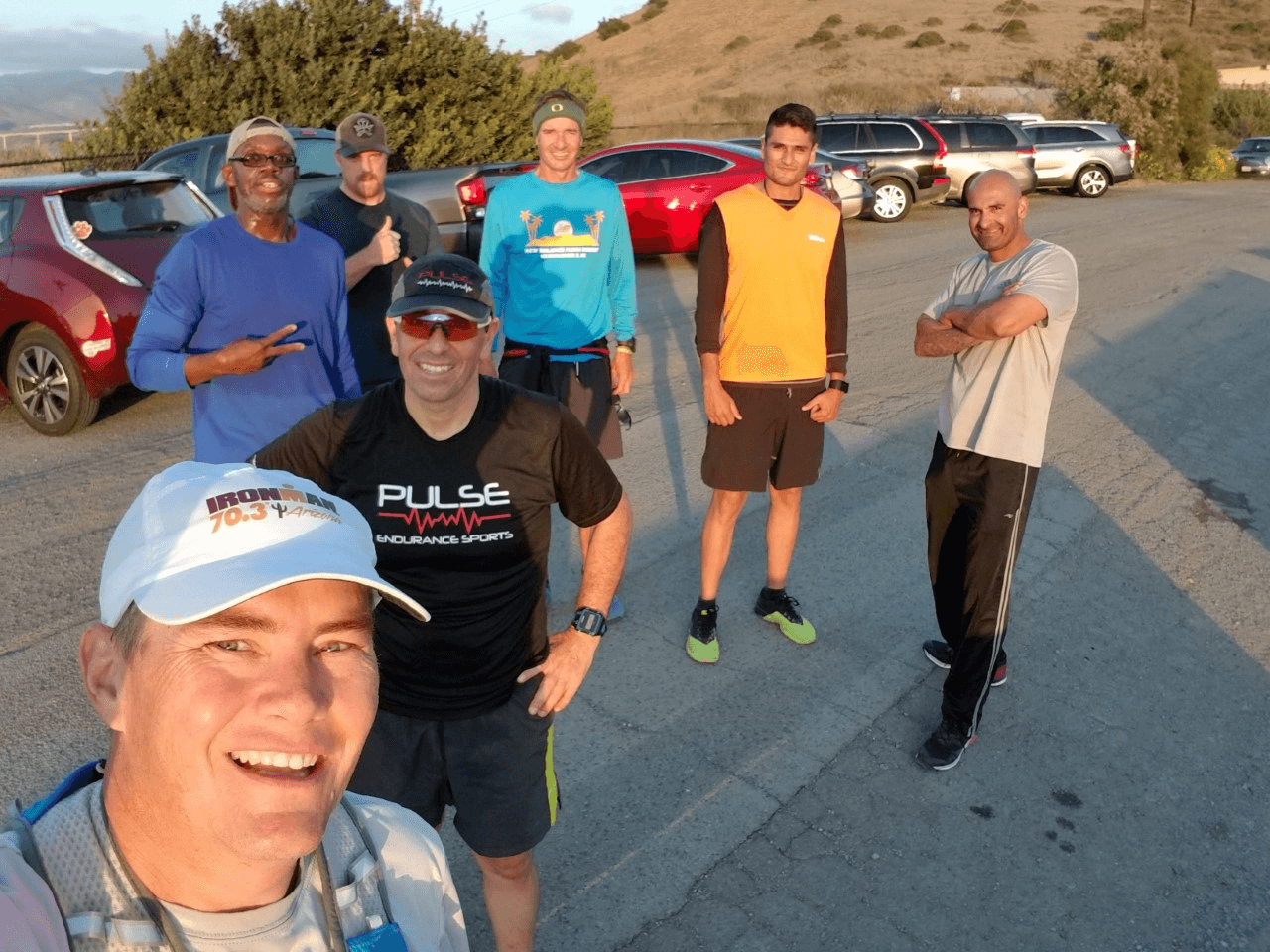 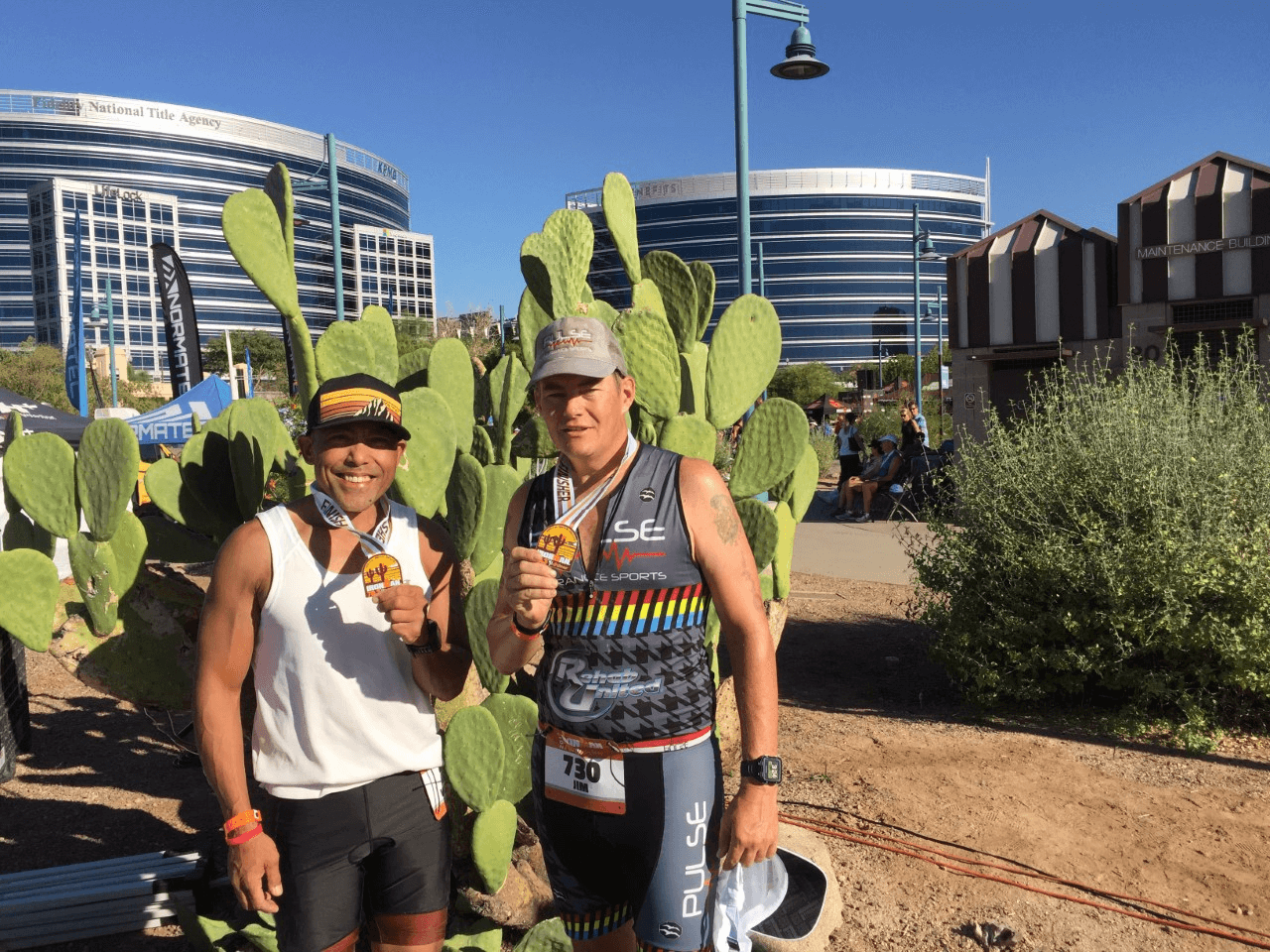 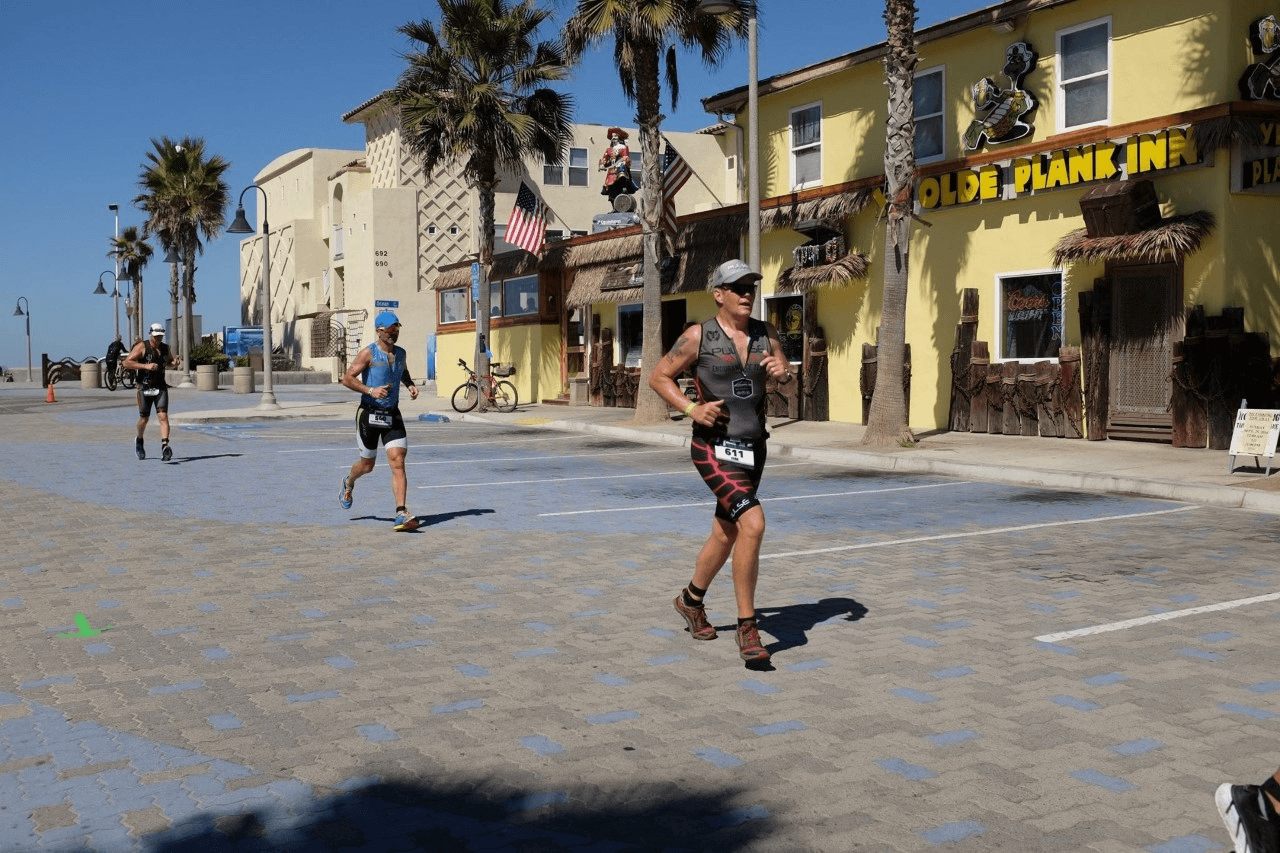